Fun & Serious opens the nomination period for its Titanium Awards 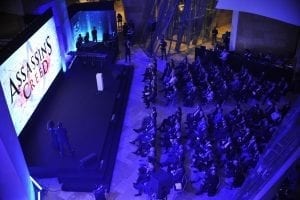 The best video games of the year will receive the recognition at a gala event that has presented awards to great figures from the industry such as Warren Spector, Yuji Naka, Peter Molyneux and Alexey Pajitnov

The festival has already announced two of its Honorary Awards, for John Romero and Jordan Mechner

These are the “Oscars” of the gaming universe, the “Goya” Awards for video consoles or the equivalent of the Conchas de Oro of the San Sebastian International Film Festival for video games. Fun & Serious, the biggest video game festival in Europe, has announced the opening of the nomination period for its Titanium Awards, through its website.

The most brilliant titles, the best designed titles, the best scripted or translated titles, the most skillfully designed titles at a musical level, the year’s sensations and the best Serious Games (for extra-play purposes such as education or health) will all be recognized at the seventh edition of F&S, to be held from 8 to 11 December in Bilbao, following the deliberations of the prestigious international jury that has been selected this year, made up of professionals from the industry and the media. The Awards will also recognize the best games by genres: adventure, role-playing, sports, action … and the best l developments at a national level.

The winners will share podiums and honors with industry majors, such as this year’s Honorary Award-winners, John Romero (developer of Doom Quake and Wolfenstein) and Jordan Mechner (Prince of Persia). And they will collect their trophies at the Festival’s spectacular closing ceremony to be held on December 11 at the Guggenheim Museum in the Basque capital.

Any developer or company, regardless of size, seniority or capital, can submit their proposals from now until next November 1, through the form that is available on the F&S website.

As at the last edition, 12 categories will recognize this year’s winners

Throughout its seven-year existence, the Fun & Serious Festival has become an important meeting point for the industry. Some 25,000 visitors, creators, publishers, experts and investors get together over a period of four days to raise video games to the category of an art form such as cinema or music, thus recognizing the importance of an industry that is expected to generate 4.6 billion dollars in profits in 2017 and that reaches audiences made up of more than 665 million users.

About the Fun & Serious Game Festival
The Fun & Serious Game Festival, to be held from 8 to 11 December in Bilbao, is the largest video-game festival in Europe and a key meeting-point for the industry as a whole. Last year, more than 25,000 people attended the different activities at the festival in Bilbao. The event’s mission is to recognize and promote the work of video-game producers, directors, artists and developers, based on a comprehensive program of conferences, roundtables, networking and activities, aimed at both companies and the general public. As is customary each year, the Festival will conclude with an exclusive Grand Prize-Winning Gala for the best video-games of the year.
The Fun & Serious Game Festival enjoys the support of the Basque Regional Government – SPRI, Bilbao City Hall and the Provincial Council of Biscay. Sponsored by BBVA and El Correo. The event’s strategic partners include Microsoft, PlayStation and Ubisoft. The Festival features the collaboration of the Spanish Video-Games Association (AEVI), UTAD, Virtualware and Digipen.
http://www.funandseriousgamefestival.com/