The most popular mobile games on each continent 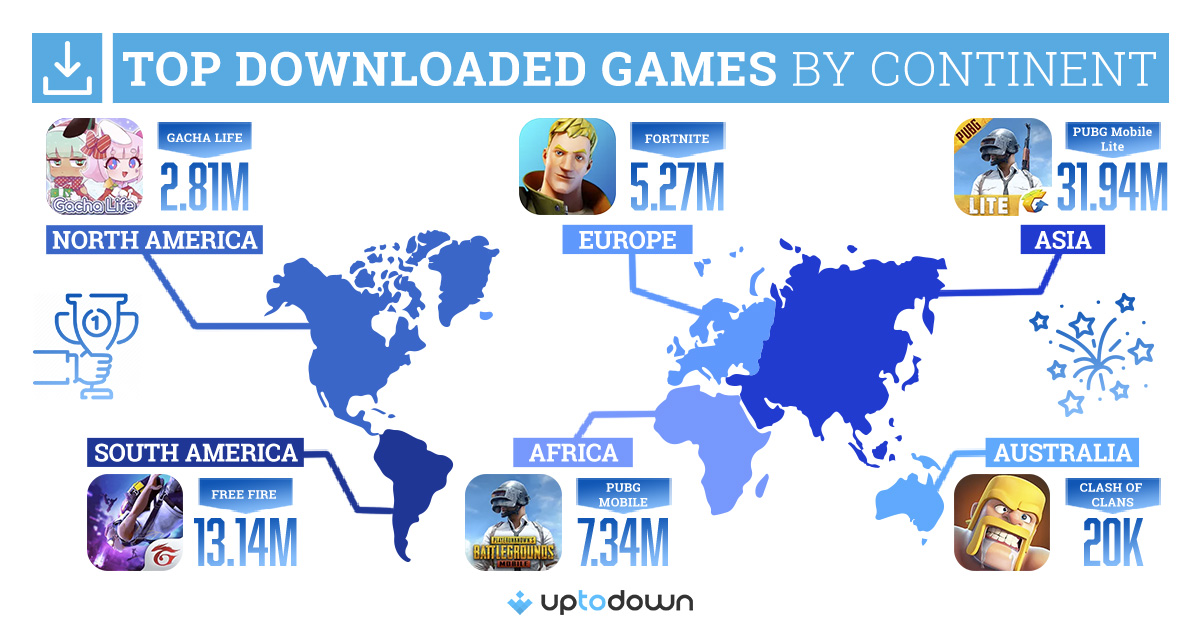 The independent application portal, Uptodown, discloses a study based on its traffic data, pointing out the mobile games that are in greatest demand in each region of the world in 2020.

Uptodown presents its first Android video game download report in order to show global trends in mobile games, as well as providing analysts, the press and other agents with realistic quantitative information. In the words of Luis Hernández, CEO of the company, “Our objective has always been to collaborate with users who want to obtain the best Apps without compromising their confidentiality and personal data, and also with the developer community, such that in subsequent communications we may seek to share information and data that we believe useful or interesting for both parties”

The report shows how Fortnite for Android is the most downloaded game in Europe. The ubiquitous Epic games game, which has taken the old continent by storm, is ousted in Latin America by another Battle Royale, Free fire, a compelling alternative that is gaining popularity for being focused on and becoming optimized for mobile devices, with little requirements in terms of technical specifications of the terminal with which it is played (this game is currently the fifth most downloaded game in the world).

Another of the best known “Battle Royale” games, PUBG Mobile, is the top choice for Asians and Africans, with the difference that in Asia, and especially in India, where it is a hugely popular game (almost 30 million downloads), they choose the Lite version of the game, specific for mid-range devices.

North America, on the other hand, shows its preference for a very different genre as the leader is Gacha life, a “casual” role-playing game aimed at a more childlike audience, where the users create anime-like characters to interact with them in different settings and minigames: 2.6 million Americans have downloaded the game in 2020 via Uptodown.

Clash of Clans and Brawl Stars are two of the most famous games for mobile devices, and both are also part of the company’s game catalog Supercell; the former is number one in downloads in Oceania, while the latter is the preferred game in Russia and Turkey, where it has achieved almost 5 million downloads.

Most downloaded games by continent

Most downloaded games by country

Uptodown is an international platform for the digital distribution of apps specialized in Android, born in 2002 and based in Málaga, Spain. Alternative and totally independent, this app store is based on the principle of respecting the privacy of users, as they are not required to register and are allowed to download software both from its own official app as well as through the web. It features a catalog of more than 3.8 million apps, divided into thematic categories and hosted on its own servers, offering for each one an information sheet prepared by its team of editors and supplemented with the opinions of users. Available in fifteen languages, it currently has 130 million active users worldwide, and enables more than 450 million downloads every month. https://www.uptodown.com/android