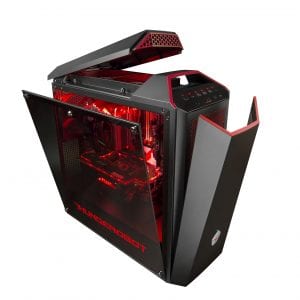 ThundeRobot announces its imminent arrival in Europe, after positioning itself as one of the leading companies in the online market in Asia.
ThundeRobot will enter the European market with a select range of laptops such as the ST-Plus and desktop computers such as the Vulcan F701

ThundeRobot, the leading company regarding the development of gaming PC’s in Asia, will begin to market its products in Europe in late April via www.thunderobot.eu, as well as through major eCommerce platforms.
ThundeRobot will enter the European market with a select range of laptops such as the ST-Plus with Intel Core i7-7700HQ processor and NVIDIA GTX1050Ti graphics card; and desktop computers such as the Vulcan F701 with Intel Core i7-6800K processor, Gigabyte GA-X99 Phoenix SLI motherboard and GTX1080 graphics card. This range will be complemented with accessories such as K70 mechanical keyboards and Armour Back-Packs.
Since its creation, ThundeRobot has been characterized by its development of maximumperformance gaming PC’s and accessories, as well as its innovative designs and technological partnerships with leading companies such as NVIDIA and INTEL. In Europe, the product will be backed up and enhanced with 24/7 remote technical assistance run by staff with extensive computer and technology training.
Carlos Patón, Product Manager at ThundeRobot Europe, has declared that “our brand is a leader in online sales in the Asian market within the gaming PC and eSports sector. With the exponential growth of electronic sports, both in terms of followers and audiences throughout Europe, the growth potential of our brand is huge. Initially, we will launch computers and accessories, but in the medium term we will expand our range of products with virtual reality solutions”
ThundeRobot has chosen Spain as its headquarters. This is where most of the company’s logistics services, technical support, spare parts stock and territory coordination will be provided. In the words of Product Manager Carlos Patón, “in Spain we have an outstanding logistics infrastructure that allows us to distribute products to anywhere in Europe in less than 48 hours and at very competitive prices. In terms of marketing and communication, we will have local teams with people on the ground in Germany, France, the UK and Italy, as well as Spain”.
The PC game market has become the most important segment of the entire industry with 1,400 million players, a turnover of US$ 27.5 billion and an annual growth-rate of 3.3% in 2017 according to a Newzoo report.